Analyzing Your Patients with NGP

Face2Gene is  proud to present different algorithms and visualizations, to provide you with state-of-the-art NGP analysis for your patients

* During the Beta stage , the magnitude of similarities is not calibrated and does not allow comparison between the different algorithms*

After preprocessing, the input image is cropped into facial regions. Each region is fed into a Deep Convolutional Neural Network (DCNN) to obtain a softmax vector indicating its correspondence to each syndrome in the model. The output vectors of all regional DCNNs are then aggregated and sorted to obtain a final ranked list of genetic syndromes — the 30 syndrome matches displayed in Face2Gene CLINIC’s RARE tab. More details in Nature Medicine.  Current availability: web, iOS & Android app.

Following the Human Phenotype Ontology terms, this algorithm allows a phenotype-based syndrome prioritization. In Face2Gene’s RARE tab, these results are combined with DeepGestalt’s results to provide a ranked list of syndromes. More details on how this was used in PEDIA algorithm, in Genetics in Medicine. FeatureMatcher is also available in LIBRARY and Face2Gene LABS. Current availability of CLINIC: web, iOS & Android app.

Based on the DeepGestalt framework a “Clinical Face Phenotype Space” is created, such that the distance between photos defines syndromic similarity. This is listed in Face2Gene CLINIC’s ULTRA-RARE tab, allowing patient photos to be matched to a molecular diagnosis even when the disorder was not part of the training set. The output is displayed in two parallel lists, the first one ranking the matched patients, and the second one, ranking the syndromes of these matched patients.

Similarities among patients with previously unknown disease genes can also be detected, and these are displayed in the UNDIAGNOSED tab in Face2Gene CLINIC. More details in Nature Genetics. Current availability: web app only.

Based on the algorithms described above we built descriptors to differentiate between 2 classes of frontal facial photos: images of patients diagnosed with a rare genetic disease and presenting a facial dysmorphia, and an equivalently sampled second class of images of unaffected individuals. The tool currently supports pediatric-aged patients, mostly of Caucasian ethnicity. While more details will soon be published, you can read how this was used in a preliminary study.  Current availability: web and mobile apps.

Combining DeepGestalt, FeatureMatcher and extensive gene mutation databases, this algorithm enables correlation of NGS results with all the phenotypic information captured by the above mentioned algorithms in Face2Gene CLINIC, thus facilitating the more accurate and efficient interpretation of genomic variant profiles. More details on how this was used in the PEDIA algorithm, in Genetics in Medicine. Current availability: Face2Gene LAB web only. 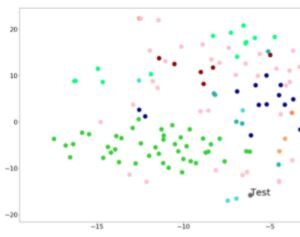 Shows a 2D projection of the case image into a “Clinical Face Phenotype Space” as compared to relevant syndromes. There are currently 2 TSNE visualizations available in Face2Gene CLINIC: the first one providing a full analysis for your patient, and a second one, for the matched undiagnosed patient. The first TSNE displays the projection of your patient’s photo as compared to the top-10 syndromes analyzed by the DeepGestalt and GestaltMatcher algorithms*. The second TSNE, in the UNDIAGNOSED tab, projects the matched photo as compared to the top-10 syndromes resulting from the GestaltMatcher algorithm analysis. Current availability: Face2Gene CLINIC web app only.

The facial descriptors can also be graphically displayed as a two-dimensional model of the face specific to the particular syndrome of interest. These composites are created taking an average of the images that participated in the training of a particular syndrome.

A graphical heatmap can be applied to visualize the degree of similarity between the two descriptors being compared, namely, the descriptor of the patient’s photo being analyzed and the composite image of the syndrome being studied.

* During the Beta stage, the magnitude of similarities is not calibrated. Please do not compare between the magnitudes of results of the different algorithms.

This website uses cookies to improve your experience while you navigate through the website. Out of these, the cookies that are categorized as necessary are stored on your browser as they are essential for the working of basic functionalities of the website. We also use third-party cookies that help us analyze and understand how you use this website. These cookies will be stored in your browser only with your consent. You also have the option to opt-out of these cookies. But opting out of some of these cookies may affect your browsing experience.
Necessary Always Enabled
Necessary cookies are absolutely essential for the website to function properly. These cookies ensure basic functionalities and security features of the website, anonymously.
Functional
Functional cookies help to perform certain functionalities like sharing the content of the website on social media platforms, collect feedbacks, and other third-party features.
Performance
Performance cookies are used to understand and analyze the key performance indexes of the website which helps in delivering a better user experience for the visitors.
Analytics
Analytical cookies are used to understand how visitors interact with the website. These cookies help provide information on metrics the number of visitors, bounce rate, traffic source, etc.
Advertisement
Advertisement cookies are used to provide visitors with relevant ads and marketing campaigns. These cookies track visitors across websites and collect information to provide customized ads.
Others
Other uncategorized cookies are those that are being analyzed and have not been classified into a category as yet.
SAVE & ACCEPT